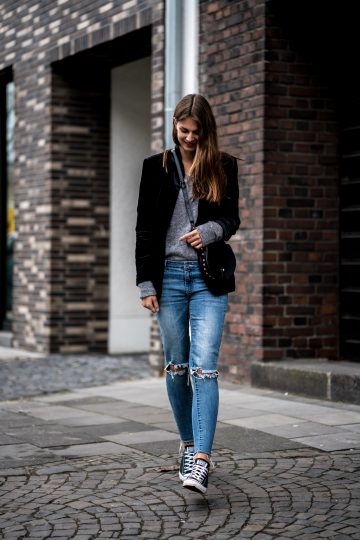 Better late than never: here is the one and only outfit we took pictures of when we were in Cologne. We spent three days in this city, but due to the long drive on day one and three, we didn’t take any outfit pictures on these days. So the outfit you can see here is the one I was wearing on the second and the only full day we had in Cologne. When I packed my stuff for the three days away from home, I didn’t do it wisely. I actually thought it would be warmer in Cologne and didn’t bring a warm jacket or coat. All I packed was a thin bomber jacket and this velvet blazer. And since the blazer is thicker than the bomber jacket, I was wearing it that day. It was quite cold in Cologne due to the strong wind, and I have to confess, that I was freezing a little bit. But what you can’t see in these pictures, I was also wearing a scarf. It didn’t make much of a different, but at least it kept me a little bit warmer.

You’ve seen it before, and you will probably see it more often in spring and maybe even in summer: my black velvet blazer. I hope you’re not getting bored of all the velvet clothes I’m wearing at the moment. I know that I’ve been sharing a lot of outfits with velvet pieces lately… but I just like this trend a lot. Last time I was wearing this blazer during Berlin Fashion Week and I combined it with a pair of black pants and black boots. It was a super chic outfit, and even though I would wear this combination again and again, I opted for a more casual outfit when we were in Cologne.

I combined my black velvet blazer with an oversized sweater, a pair of blue jeans and my black Converse sneakers. All the pieces are super comfortable and nothing I would wear to a meeting or whenever I need to wear something chic. BUT the blazer adds a chic touch to this casual and super comfortable outfit, it tops it off and makes it look more interesting. Another piece I chose to match the chic blazer, is my favourite Rebecca Minkoff bag. Those two pieces, the bag and the blazer, are the chic part of this outfit.

Well, but even with the two chic pieces I probably wouldn’t wear this outfit to a meeting. If I had a meeting, I would probably change the shoes and wear a pair of black boots instead of the sneakers. With a pair of black boots, the whole outfit would look completely different, and you could wear it to a meeting for sure. If you want to create an even more chic outfit, you should change the sweater as well. You could go with a white shirt or a basic white tee. Even a black sweater would look chicer than this oversized grey sweater. You see, it’s super easy to turn this outfit into an entirely different outfit by changing a few pieces only. How would you combine the velvet blazer? And which parts would you change in this outfit? I would love to read your comments about it! xx 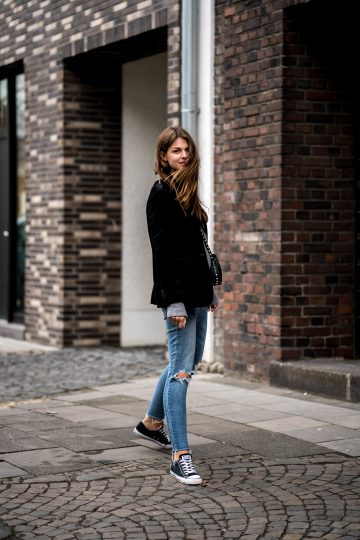 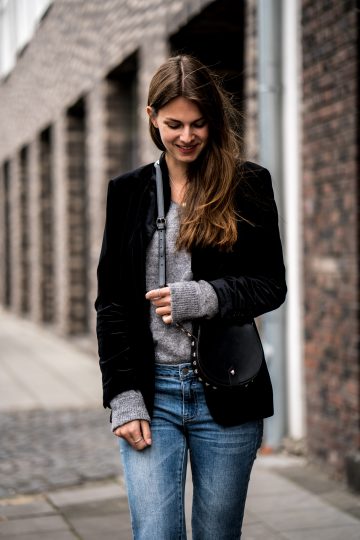 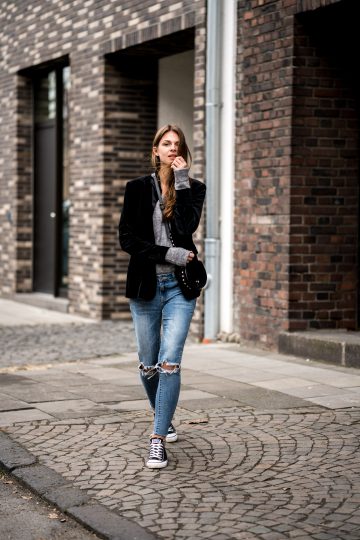 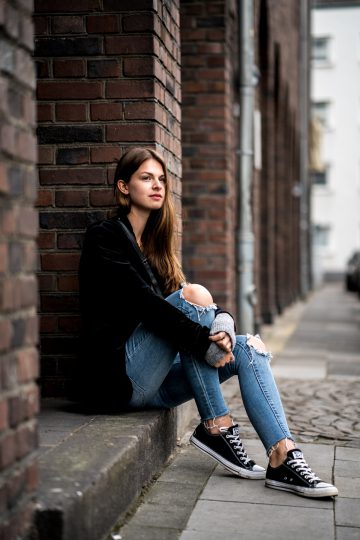 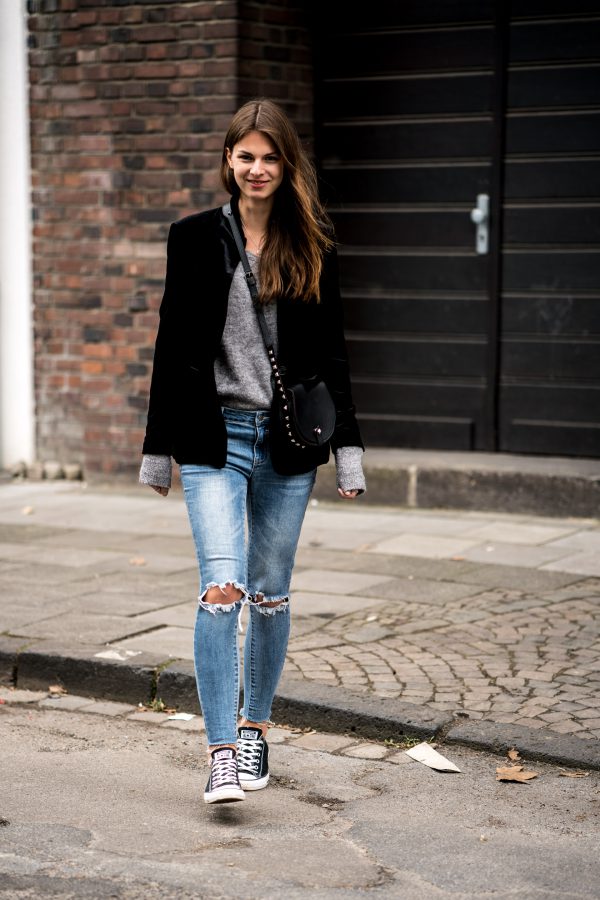 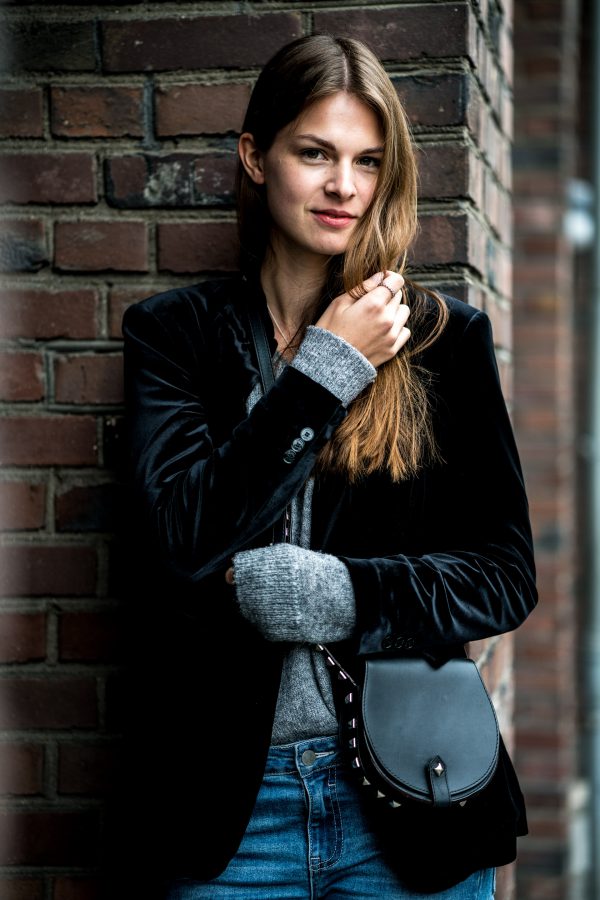 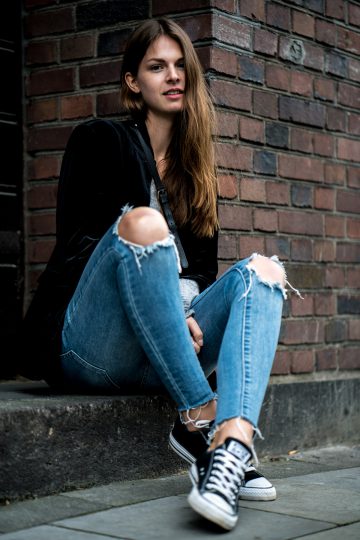 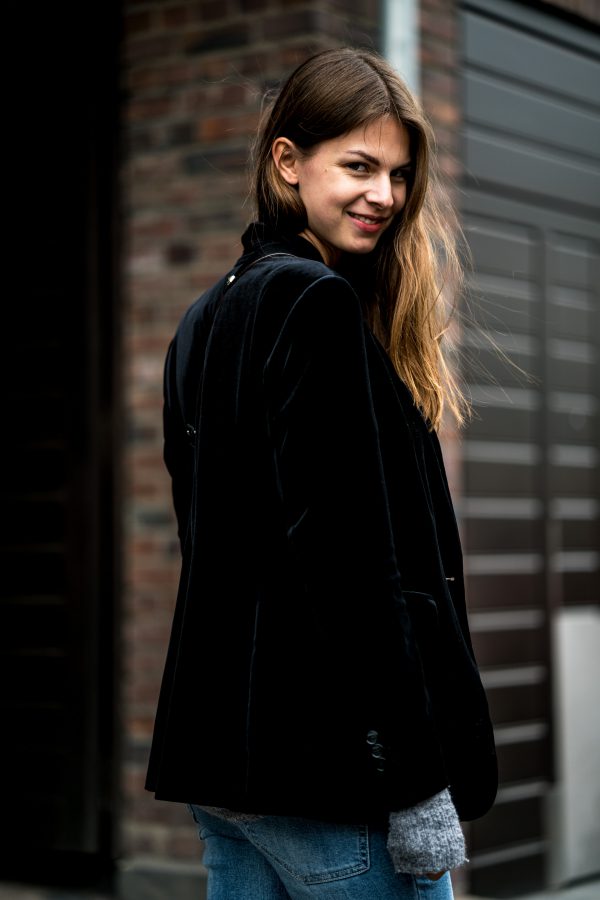 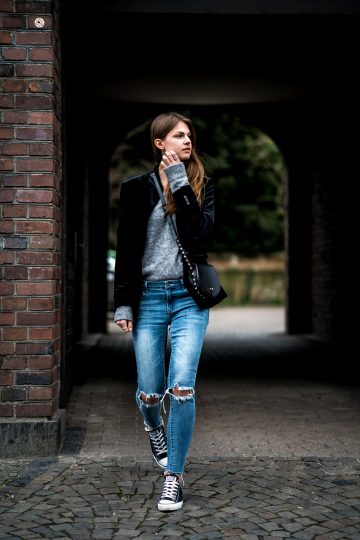 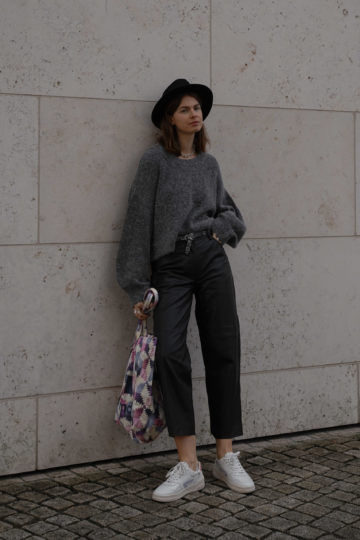 Which vintage fashion pieces are worth investing in?