This year everything is a little different, and so it will be the turn of the year. No big parties, celebrations only around closest circles or alone. Especially as someone who lives in a big city, this is totally unusual. It lacks the advertising for all the big New Year’s Eve parties and the oversized offer, where you can never decide what actually to do. Well, this year, that decision was more or less taken away from us. This year we will spend New Year’s Eve at home.

Since the question arises but directly, how the New Year’s Eve look this year will look. Not that this is not already under normal circumstances, always a challenge. This year, of course, you can make it especially easy and stay directly in pajamas or sweatpants. By the way, I have planned the latter for my New Year’s Eve outfit this year. However, I will combine my joggers with matching clothes for New Year’s Eve. A few ideas I have already compiled and these I will share with you below.

Usually, our clothes for New Year’s Eve consist mostly of fancy stuff like dresses, glittery tops, and high heels. No one would think of wearing a pair of joggers on the last night of the year. This year, however, this is definitely possible. This year, the New Year’s Eve outfit maybe both: cozy and chic. If you like a more casual New Year’s Eve outfit, you can combine your sweatpants (I wore the gray sweatpants from Onweekends) with a black longsleeve and loafers. But chooses here best rather elegant tops for the evening. I opted for a black longsleeve with shoulder pads. This one little detail makes the look appear chicer on dressed and at the same time but does not lose comfort. To this, then either a pair of loafers, if you are more in the mode comfort or but you put on a pair of high heels for a more chic New Year’s Eve look.

A rather cool New Year’s Eve outfit is this one: Sweatpants combined with black boots and a black top with a rather flashy cut. The combination of sweatpants with boots is super cool and comfortable; at the same time, you look more dressed directly than with slippers. For the top, you should choose something that rather fits into the category of New Year’s Eve clothing. This can be a shirt or a rather tight-fitting top with eye-catching details or a striking cut. I have resorted to the latter, a top that shows a little more skin in certain places at the same time but covers enough.

Glitter outfit New Year’s Eve: the combination of sweatpants and a sequin top

Finally, another New Year’s Eve glitter outfit where you can go a bit further. This New Year’s Eve outfit is anything but boring or casual. As a last, I would like to show you a rather sexy New Year’s Eve outfit. For this, I combined my joggers with a one-shoulder shirt with sequins as well as high heels. Who would have thought that even sweatpants can look sexy if you combine them, right?

I hope these looks will help you a little bit if you still need a last-minute New Year’s Eve outfit and have no idea what to wear this year. Even though there won’t be a big celebration and we’ll spend the evening at home, it’s still an excellent occasion to get a little dressed up once again. But, of course, we do not want to forget about comfort in this. Clothes for New Year’s Eve 2020 can be both: dressy and casual. Get the sweatpants out of the closet and show the world that you can also combine them sexy and chic. Hopefully, my New Year’s Eve outfit inspirations can help you with this. Let me know what you will wear this year and how you like my New Year’s Eve looks. xx

P.S. You can find the sweatpants I am wearing on Onweekends. 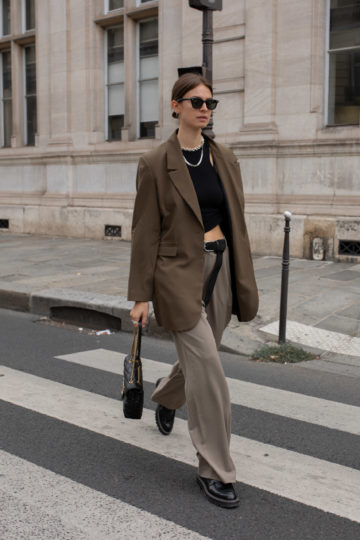 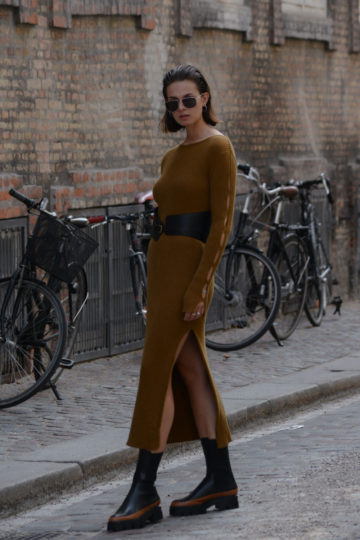 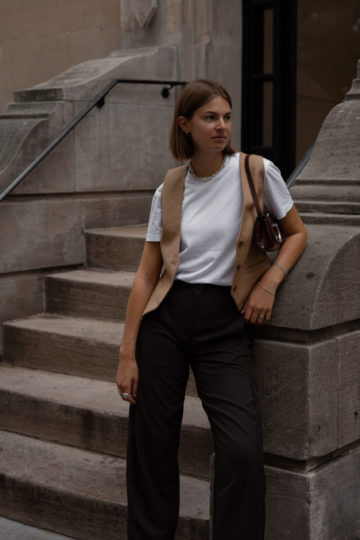